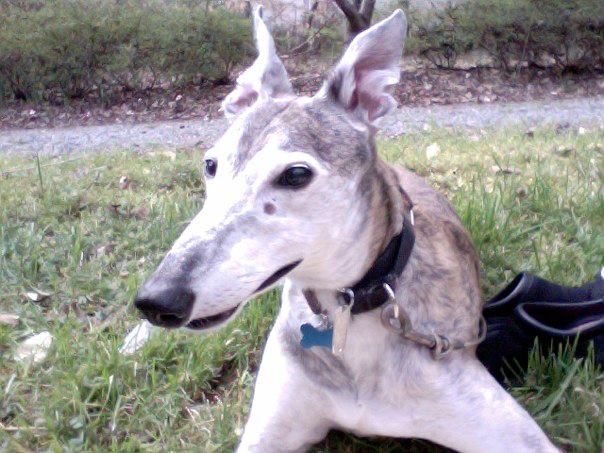 Note: the following testimonial was submitted for the Petco Holiday Grant Campaign on behalf of Greyhound Friends. Thank you, Holly!

When my future husband and I decided to adopt a dog together, we agreed that a greyhound would be a good match for us: mostly lazy, very sweet, and not very loud. Not being outdoorsy people, we didn’t want a dog that demanded to go hiking every weekend. We thought a dog often called the world’s fastest couch potato sounded just right.

Heading to [GFNC], I knew the first dog we met would be The One. He’s much more rational and practical, so he was adamant that we were going only to look at and meet some dogs, not adopt one.

Then there was Kelso Chatroom (why, oh why, do owners give such amazing dogs such horrible names?). The dog we would soon know to be Seelie was the first one we took out of her kennel to the fenced yard to play with. She was a gorgeous brown-and-black brindle, sleek and small, even for a girl.

I was done in from the start. Seelie sniffed us, ran one quick lap around the yard’s perimeter, and came back to us, smiling and ready for some lovin’. For Kevin, as she rounded the last turn and came toward us, the world went into slow motion, her ears flapping in the breeze kicked up by her speed, her big brown eyes boring into his. This moment would forever after be known as The Look.

He insisted we meet at least one other dog, though it was purely to save face: We met another dog, and I’m sure he was someone else’s perfect match, but Seelie was ours. We put her in her kennel, walked back into the office, and Kevin slapped that credit card down faster than physics and reason allow.

Seelie held her ears folded back against her head almost all the time in a gesture that made me think of hands folded together in prayer: Her prayer ears brought me more peace than any religious service ever has. 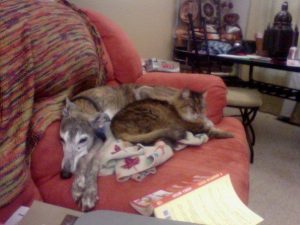 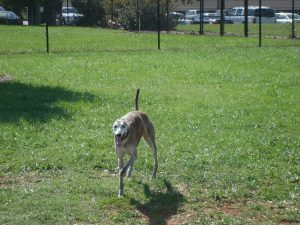 In some legends, the seelie are the good fairies, and truly our Seelie-girl was the best of them all. Seelie was peace incarnate, and though it’s been almost three years since she died, still we carry that peace with us. The joy Seelie brought us made it only a matter of time until another retired racer joined our family — and another, and another.

– Holly Lux-Sullivan
©2016-2023 Greyhound Friends of NC, All Rights Reserved
Back To Top